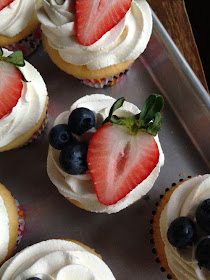 I started using this cupcake recipe for a friend's wedding last summer (see White Cupcakes with Whipped Mascarpone, Raspberry, and White Chocolate recipe). The frosting was delicious as it was--very thick and creamy, but very light compared with butter cream frosting. I ended up adding a cup of heavy whipping cream to that recipe, though, because one batch of frosting was not enough for one batch of cupcakes; but a double batch was too much. By adding the extra cup of cream, I got just the right amount of frosting AND I got a little bit of a lighter, creamier frosting. (The recipe below reflects the added cup of cream, so don't add another!)
I think I even like this frosting better for cupcakes than my Stabilized Whipped Cream because it's richer and thicker than the whipped cream, without the heavy sweetness of a butter cream. So many people who've tried this frosting exclaim that they love it on cupcakes because it's so light, not too sweet. If you love sweet frosting, just go for the butter cream. But if you're looking for a light, yet rich tasting vanilla frosting, try this. I think you'll love it.

Ingredients:
Instructions:
In the bowl of a standing mixer fitted with a whisk attachment, mix the mascarpone, sugar, and vanilla on high until completely blended. Add whipping cream to the mascarpone/sugar mixture, and mix on low until cream is mostly incorporated into the cheese/sugar mixture. Scrape bowl. Then whip on high until stiff peaks form.
Transfer to a piping bag fitted with your favorite cupcake frosting tip.