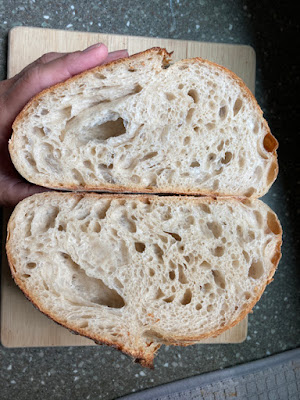 I've been making this sourdough bread for over a year now, and I usually just go back to the recipe at KingArthurFlour.com and make the modifications based on the tips from Mike at Pro Home Cooks. The internet is filled with recipes and tips about making sourdough bread, so I'm not really trying to compete in that pool. I really just want to close the KAF tab on my phone so I can just go to my blog for the recipe when I want to bake some loaves. Yes, I still consult the written recipe when making this so I don't mess it up.

If you're new to sourdough baking, you really do need to watch the Pro Home Cooks video. I have not reached the point where I weigh my ingredients, so if you are looking for a recipe that avoids that, this is the recipe for you.

When I started baking sourdough, I used my Le Creuset Dutch oven, and that bread was great. Then I decided to spend the $39.99 for the Lodge Combo Cooker, and it's been fantastic. I get a nicer crust, crisp and bubbly. Plus, I think the oven spring is better and I have a better chance of getting that pro-looking ear on my loaf.

So there. That's all I have to say right now about this recipe. I hope you find it useful.

Adapted from KingArthurFlour.com with help from Mike at Pro Home Cooks

Once your sourdough starter is ready (watch Mike at Pro Home Cooks to know what this means), thoroughly mix the flour and water in a large mixing bowl. Cover with plastic wrap and allow to "autolyse" for about 30 minutes (it just sits there).

Add the salt and starter to the autolysed flour/water mixture. Try to incorporate the starter as much as possible, but it may not get completely smooth at this point. That's okay. Once mixed, cover with plastic wrap again.

You will fold the dough for a total of 4 times over the next two hours. After folding four times, you have a choice: refrigerate the dough for 8-12 hours, and form the loaves after that or allow the dough to rise until very puffy, form the loaves, and then refrigerate the formed loaves in the fridge for the final rise. Both ways do the job. I'm going to describe the second method (first rise at room temperature and then second rise in fridge).

When dough has risen once, turn it out onto a floured surface and cut in half. Working with one of the halves at a time, pull sides up to form a dough "purse," pinching it all up on the top in the center so the bottom is smooth and the top is pursed and pinched. Turn dough so pinched side is down and smooth side is up. Cover the loaves and allow to rest for 20-30 minutes before forming.

Form your loaves. There are several methods of doing this which you can search up on Google or Instagram, but here's a video that shows a nice basic technique. I set mine in a brotform liberally dusted with a gluten-free flour blend that is mostly rice flour. I hear rice flour is good, better than wheat flour for this. Cover loaves in the brotform (or a floured tea cloth lined colander will work in a pinch) with a floured tea towel and place each in a plastic bag (like a grocery bag) and place in the refrigerator for 8-16 hours.

When ready to bake, take the loaves out of the fridge and turn your oven on to 500-550 degrees (550 is preferred, but my current oven only goes to 500). Place the cast iron Dutch oven or the combo cooker in there to preheat with your oven. This is important. Both the oven and the baking vessel must be screaming hot.

Working with one loaf at a time, turn the risen loaf out onto a piece of parchment. When using the Dutch oven you can leave the parchment in a large square. If using the combo cooker, trip the corners to avoid having burned paper in your oven.

Dust off the loaf and score with the sharp razor or lame. Take the Dutch oven or combo cooker out of the hot oven, remove the lid (the deeper of the two pieces). Lift the scored loaf onto the bottom of the combo cooker or place inside the Dutch oven. Cover and place in oven.

Bake covered like this at 500 or 550 degrees for 20 minutes. After 20 minutes, remove the top/lid, place the bottom onto a baking sheet, turn the oven down to 450 degrees, and continue to bake the loaf for another 20-25 minutes, or until the loaf is a nice, relatively deep brown color.

Remove loaf and place on a wire rack to cool. Turn the oven back to 500 or 550 and put the Dutch oven or combo cooker back in to reheat as well.

Repeat the scoring and baking process with the second loaf.

Freeze leftovers at the end of the day. I like to slice mine before freezing so it's ready for my son to make paninis at the drop of a hat. 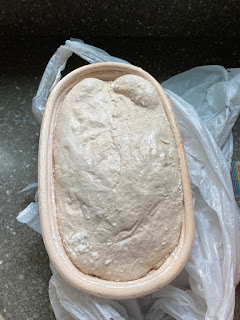 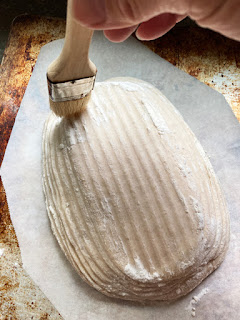 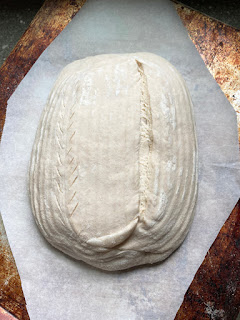 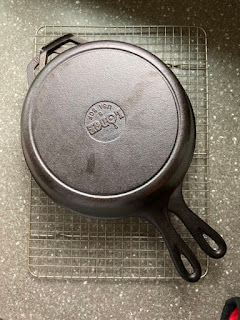 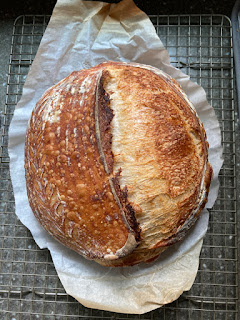