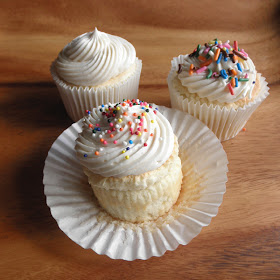 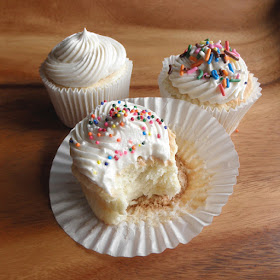 I'm not even sure what to say about this recipe. It's just a white cake recipe where I subbed Better Batter GF flour for cake flour. Maybe it's the cake enhancer that pushed them over the edge, but they're not quite what I was going for.
The cupcakes taste good according to me and my gluten limited son. The texture, though, is somewhat strange to me (and to him, although I don't think he could quite articulate it). It's almost as if they are too moist. Moist is desirable in a cupcake most of the time, but when you chew these cupcakes, they almost taste underdone. The tops and bottoms are well-browned and it looks well baked, but it is so moist and soft that it turns a little doughy in your mouth. I think some people like that, but I am not one of them.
We'll have to see if Max chooses to eat any more of these. That will be the true test. For now, I'm really not sure what I'm going to do with all of these cupcakes.

Ingredients:
Directions:
In a large mixing bowl, beat the butter and vegetable shortening to combine. Add powdered sugar, vanilla, and 4 tablespoons milk. Mix on low until sugar is incorporated. Then beat on high until well blended and fluffy. If the frosting seems too stiff, add more milk, a tablespoon and then a teaspoon at a time until you reach the desired consistency.