Ever since posting my award-winning Nanaimo Bar recipe here on my blog, I've had several people tell me (and post on Pinterest) that they are not REAL Nanaimo Bars because I do not use Bird's Custard Powder in the middle layer. I've never been able to find it in any markets where I live, so I've always just subbed Jell-O instant vanilla pudding. I've always thought those Canadians who criticized or corrected me were being sensitive, that there really couldn't be THAT big of a difference between the two. They look almost the same, right?
Well, after finally purchasing some Bird's Custard Powder on Amazon.com, I've realized that all of those pushy Canadians are right: Nanaimo Bars do, in fact, taste better with the Bird's. They just do. As my husband said, "I feel like I can just eat more of these ones." This helps explain why I found it so easy to eat three very large Nanaimo Bars the first time I had them at Portland State University so many years ago. These are the Nanaimo Bars I fell in love with, and I'm glad I finally gave in and bought the Bird's.
I had a few friends over to help me with the tasting, and four of five of us agreed that the Bird's Nanaimo Bars tasted better, lighter, less sweet than the other. My friend who preferred the Jell-O pudding ones is a sugar lover, so she likes hers sweeter. The Bird's bars, in addition to tasting a bit lighter, had a more distinct coconut flavor--not overwhelming, but subtle, and I liked it.
So, if you're going to try a Nanaimo Bar recipe, try this one. They're awesome.

Line the bottom of a 9 X 9-inch pan (glass or metal) with parchment paper or non-stick foil.

Bottom Layer:  In a 300° oven, toast coconut and chopped pecans until golden brown and fragrant, stirring occasionally. (This toasting is optional, and not necessarily traditional, but I like it.)   Remove from oven and set aside.  In the top of a double boiler, melt ½ cup butter and  cocoa and sugar. Whisk to combine.  Whisk in the beaten egg.  Whisk until thickened, and then remove at once from heat.  Fold in the graham cracker crumbs, coconut, and pecans.  Press into prepared pan.  Put in refrigerator while you prepare the next layer.

Middle Layer:  In a large mixing bowl, cream together ½ cup softened butter, half & half, and custard powder.  Fold in the powdered sugar.  Beat until very light.  Spread evenly on top of the first layer.  Cover with plastic wrap.  Put in refrigerator again for an hour or so, until middle layer is firm.

Top Layer:  In a double boiler melt the chocolate chips and Crisco or vegetable oil. The chocolate may melt the middle layer if it’s too hot, so you might want to let it cool for a little bit.  Pour onto second layer and spread evenly.  Drizzle white or milk chocolate over the top for decoration.*  Let set in the refrigerator for 10 to 15 minutes and then cut.  (This keeps the chocolate from cracking when you cut it.)  Refrigerate for 2 hours before serving.

Note: Be sure to remove any foil or parchment paper that may have stuck to the bottom of individual bars.

*I've created a post that gives explicit instructions and photos on how to make the "feathery" lines you see on these bars: How to Make Those Feathery Lines on Nanaimo Bars. 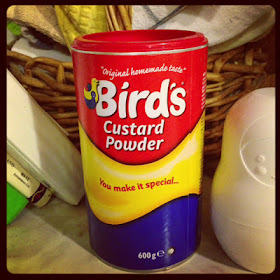