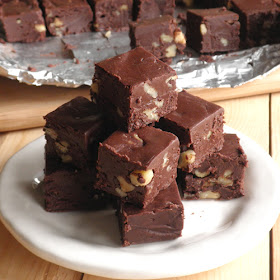 This, to me, is what fudge should be.  Deep chocolate flavor, smooth, sweet, with a few walnuts for contrasting texture and bitterness.  My Grandma Kelly knew how to make fudge, and thankfully, she passed the recipe along.  I don't think I've made this fudge since the 1990's though, and I'm not sure why. Perhaps Nanaimo Bars have taken their place in my repertoire.  It needs to make a comeback, and I think this Easter is the perfect time.  Easter happens to be the season that I associate most closely with fudge, not Christmas, because my mom would always include a Sees fudge egg in our Easter baskets.  Good times.
The fudge pictured above was made with Dove Dark Chocolate instead of chocolate chips.  And it is delicious.  Now I just have to figure out how to get rid of it without eating most of it myself.

Ingredients:
Instructions:
Take an 8"x8" square pan and either butter it or line it with foil.
Place chocolate chips (Dove chunks), butter, and vanilla in a large heat-proof bowl.
In a large heavy saucepan over medium heat, bring sugar, unsweetened chocolate, evaporated milk, and marshmallows to a boil & boil for 6 minutes, stirring constantly. (Be careful here.  Mine kept bubbling up like lava, splattering itself here an there on my stovetop.)
Pour cooked mixture over the chocolate chips, butter, and vanilla.  Stir until ingredients are melted together & have a dull appearance.
Add nuts & pour into prepared pan.  Smooth out the top with a silicone spatula.
Allow to cool and firm up before cutting.

My passion for rainbows draws me to colorful foods.  I think I found these on foodgawker.com a while back, and they are so, so cute.  Who knew that simple nonpareils could turn a simple vanilla cupcake into a rainbow treat for the eyes?   Well, I guess Jessica of How Sweet It Is did.
I like this recipe not only for the sprinkles, but also because it's a recipe that makes only 12 cupcakes.  These cupcakes are quite a bit more dense than the ones you make from a box, but they're moist, tender, and tasty.  Worth the extra effort, for sure.  And if you're wondering if they have a crunchy texture due to the nonpareils, they don't.  The sprinkles melt into the cupcake leaving just the color.
You'll see in the pics that I have some round and some heart-shaped cupcakes.  I couldn't really figure out a cute way to frost the heart-shaped cupcakes, so I only have unfrosted pics of those.  If anyone has suggestions on how to frost heart-shaped cupcakes beautifully, please share your insight.  Frosting is not one of my strong suits.
Homemade Funfetti Cupcakes
--adapted from How Sweet It Is
Ingredients:
Instructions:
Preheat oven to 350 degrees F.
Cream butter and sugar in the bowl of an electric mixer until fluffy, about 3 minutes. Add eggs and vanilla and beat until combined.
Combine dry ingredients in a bowl. Add half of the dry ingredients, mixing until just combined. Add the milk. Once mixed, add remaining dry ingredients. Fold in assorted sprinkles.
Pour into cupcake tins and fill 2/3 of the way full. Bake for 18-20 minutes. Let cool, then frost.
Makes 12 cupcakes 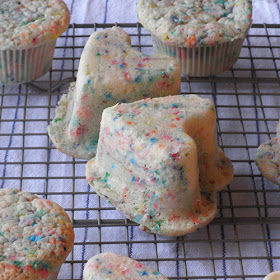 
I've decided to try posting some very basic foods that I cook but that I don't normally think of posting.  I tend to take these sorts of things for granted, that ANYone could think of making them, but perhaps that's just not true.  These Cinnamon Crispas are a quick, easy sweet treat that I'll make sometimes to have after a good Mexican meal, like my Chile Colorado Burritos or Carne Asada.  They're really super good with some deep-fried ice cream, but I don't even attempt to do that.  I leave it for the Mexican restaurants and Paula Deene.
I think these are actually called buñuelos in Mexican cuisine, but I always think of them as Cinnamon Crispas, as in that tasty, crispy dessert they used to serve at Taco Bell in the 1980s.  It's probably one of the simplest desserts, short of buying a pack of Oreos. They're just flour tortillas (new or past their prime--not too far, though), cut into wedges, fried in hot canola oil and then shaken in cinnamon sugar.
Thin tortillas produce crisper crispas; thicker tortillas produce crispy chewy crispas, which is what I like.

Ingredients:
Equipment:
Instructions:
Heat oil in frying pan over medium-high heat.  You can either check the temp with a thermometer (ready at 375 degrees) or put in a little piece of tortilla when you think it's ready.  I use the little tortilla method.  Actually, I like to put a little piece of tortilla in the oil pretty early on and when I see/hear it frying, I figure the oil is ready.  Don't let it get too hot, though.
While oil heats, cut tortillas into eighths, like you'd cut a pizza.
Place cinnamon and sugar in the paper bag, close top, and lightly shake to mix.  Set aside.
When oil is hot, fry 4-5 wedges at a time, turning a time or two until both sides are a deep golden brown.  Remove with tongs to paper bag with the cinnamon-sugar.  Close top and shake gently.  Remove with the second pair of tongs and place crispas on a paper towel-lined plate to drain.  Repeat with remaining tortilla wedges.

Makes 8 reasonable servings, or 2 very unreasonable ones...you get the idea.


This recipe is one version of my very favorite brownie recipe that came from a Ghirardelli Sweet Ground Chocolate can.  I usually make them with frosting, but tonight, I decided rather late in the game that I would make brownies for our guests, and I don't necessarily like these brownies with NOTHING on top.  I mean, come on, a naked brownie just isn't decadent enough is it?  So, since I always have Dove Dark Chocolate Promises on hand, I chopped up a few and threw them on top to act as a frosting.  We'd be eating them warm anyway.  Then, because many of us love nuts with our brownies, I added nuts to half of the pan.  In the photo, you will notice that I place the nuts on TOP of the brownies.  I do this for two reasons: #1 It allows me to only have half of a pan of brownies with nuts because I'm always trying to please everyone and #2 When the nuts are on top, they get crisp and toasty, which adds another couple of dimensions to an already fantastic brownie experience.
Ghirardelli purists might think it heretical of me to mix the Ghirardelli ground chocolate with Dove chocolate, but it works, and these brownies were a hit.  They were actually too gooey for my taste, so I stuck to the edges.  If you like dryer, cakier brownies, this is not your recipe, but if you like them really fudgy and gooey, this is the ticket.  Just be sure to brew a nice pot of fresh coffee or have a significant amount of fresh milk on hand when you eat these.  They are rich.


Ingredients:
Instructions:Preheat oven to 350°F. Using a spoon, stir eggs with sugar and vanilla. Add melted butter. In a separate bowl, mix the ground chocolate with flour, baking powder, and salt with a whisk. Stir flour mixture into egg mixture. Spread evenly into a buttered 8” pan (or a pan lined with parchment paper or non-stick foil). Sprinkle chocolate chunks evenly over the top and press lightly with the palm of your hand. If you're adding nuts to half or all of the pan, sprinkle those on too and gently press.  Bake 25-29 minutes or until a toothpick inserted in the middle comes out relatively clean. (I might even let them go to about 32 minutes.) Allow to cool. Cut into squares. Makes 16-20 brownies.


So, the staff at the school I work at decided to have a "Souper Bowl" party today, to which I decided to take my delicious Chicken Pot Pie Soup.  As usual, I overdid it on the pie crust pieces that are served with the soup.  I brought home almost a full recipe of pie crust because I had doubled it.  I ALSO happened to have some vanilla pudding in the fridge because I made Nanaimo Bars for the fourth graders I teach, and my son wanted to make pudding out of the leftover vanilla pudding powder.  Of course, I always have bananas and heavy cream in my house, so I decided to see what would happen if I put all of these items together into cute bite-sized banana cream pie.  They're actually more like two bites of banana cream pie, but they're so cute, and so yummy.  I don't know if I'll ever make them again, and the recipe is my best guess at amounts.  If nothing else, perhaps this will inspire me and others to try other bite-size versions of pies with leftover pie crust.

Ingredients:
Instructions:
In a medium bowl, whisk vanilla pudding mix and cold milk for 2 minutes.  Cover with plastic wrap and refrigerate.  (I'm not sure how long.  Mine refrigerated overnight.)
Whip heavy cream and powdered sugar into stiff peaks.
Using either a pastry bag with an open star tip, or using a zip-top bag with  about 1/4 inch of a corner cut off, pipe about half a teaspoon of chilled pudding onto each pie crust piece.
Place a slice of banana on top of the dab of pudding.  Then squeeze about 1 1/2 teaspoons of pudding onto each banana slice.
Refrigerate the pies while you prep the whipped cream into another pastry bag (or the same one with the tip washed), and then pipe about 1 1/2 teaspoons of whipped cream onto each pie.  Refrigerate until ready to serve.
Makes...um...I'm not sure, but I'd guess about 3 dozen bite-size pies.
*You can also use stabilized whipped cream instead of the whipped cream and powdered sugar, if you want them to stay pretty longer.

Homemade Vanilla Pudding (I prefer the boxed stuff for this recipe, but if you're a purist, you might want to use this instead.)

Instructions:
Mix cornstarch, sugar and salt in a medium size saucepan.  Add milk and cream and cook over medium heat until thickened, stirring constantly.  Pour a spoonful amount of hot mixture into egg yolks; blend thoroughly.  Add about 1/3 of the milk mixture to the egg yolks, then pour back into the saucepan.  Cook another 2 or 3 minutes.  Remove from the heat and add the butter and vanilla.  Cover with plastic wrap and press plastic against the
custard.  Refrigerate until completely chilled.

Pie Crust
Ingredients:
(Note: you can also use store-bought refrigerated pie crust)
Instructions:
Preheat oven to 400°F.
In a medium bowl, mix flour and salt. Cut 4 T butter into flour until it looks like coarse meal, and then cut in Crisco until well blended. Add ice cold water and stir with fork. Then use your hands to gently work the dough into a ball.  Flour a rectangular sheet of wax paper, place dough ball in the middle, flour the ball, and cover with another rectangular sheet of wax paper. Roll dough out to a thickness of about 1/8”.  With a sharp knife or pizza cutter, cut dough roughly into 1.5”x 1.5” squares.  You can also be creative and use cookie cutters to make cute shapes.
Place dough pieces on a parchment-lined cookie sheet.  Prick each piece a few times with a fork.  Bake at 400°F for 11-13 minutes, or until browned on the edges.   Remove from oven. 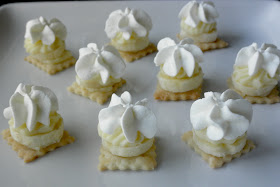