It didn't take me many trips to Jamba Juice to realize that I could work that same magic in my own kitchen. All I needed was some fruit, juice, yogurt, a tall cup, and an immersion blender and voila!  Fresh homemade smoothies, any flavor I wanted, at a fraction of the cost of a Jamba Juice.  Now, I realize, a lot of people don't mind paying for the convenience, but if I can make something comparable at home without too much trouble, I'm going to do it.  So, here is what I do to recreate a Jamba Juice smoothie.  I'm not sure what its name is, but I changed it up anyway by adding mixed berries.

Ingredients:
Instructions:
In a tall plastic cup (I use a 32 oz. cup from an Angels game giveaway), place all of the ingredients in the order listed.  Fill with enough water to come about 1 inch from the top of the fruit.  You can always add more water to thin it out later.  With your immersion blender in hand (I use my Braun Hand Blender), push down into the cup as far as you can and then start the blender.  Blend gently with up and down motions, pushing down on the frozen fruit to break it up.  After you've gotten the blender to the bottom, keep blending for another 30 seconds or so, moving the blender up and down until you have a smoothie texture. Add more water & blend if the smoothie seems to thick.  Pour into a glass with a straw and enjoy!
Makes about 1 1/2 servings--enough for me and my 8-year-old eating buddy. 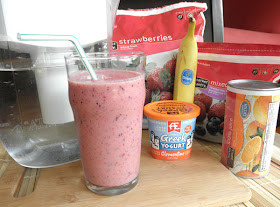 
I hope my brother-in-law, Jaime, doesn't mind that I'm posting his salsa recipe.  I'll post and ask for permission later.  This is one of my very favorite salsas, second only to Casa Gamino's in Paramount, California.  It's rather time consuming cutting up the tomatoes and everything, but it makes a ton and lasts a while, AND it's so fresh and tasty.

Ingredients:
Instructions:
Finely chop tomatoes, red & green onions and throw into a large bowl with all of the other ingredients except the cilantro.  Preferably, use a hand blender to partially blend the mixture.  Stir in cilantro.  Serve with your favorite tortilla chips.  Store in a stoneware or glass container, covered, in the refrigerator.
Makes about 8-10 cups of salsa. 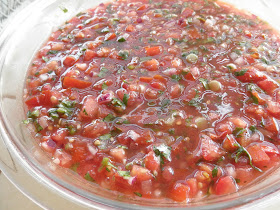 I really like popcorn when it's drenched in butter, or even butter flavored topping at the movie theater.  As often as I like eating popcorn, though, I really can't use as much butter as I'd like.  When I was a kid, my mom would pop the popcorn in melted butter.  Yum!  The salt in the butter would evenly coat the popcorn and the butter would brown just a little bit to give it a deeper butter flavor.  So good.  Generally, I pop my popcorn in canola oil.  Last night I decided to throw in two tablespoons of butter along with the canola oil to see how it would taste, and it was perfect.  Just the right amount of butter flavor, not greasy, with cute little browned butter flecks all over.  I think I'll be doing this again.  Here's the recipe in case you'd like to try it too. 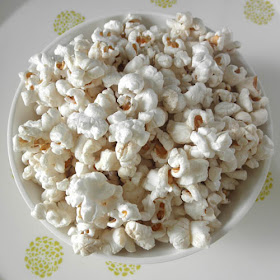 Ingredients:
Instructions:
In a heavy medium sized pot, heat canola oil and 2-3 kernels of popcorn.  When kernels start to sizzle and turn white, add the rest of the popcorn.  When those turn white, add the butter and cover.  Shake here and there as the popcorn pops.  When the popping has slowed to 1-2 seconds between pops, remove from heat and pour into a large bowl.   Sprinkle with salt.

I am currently in "Cinnamon Roll Mode," preparing for the upcoming food competition at the Iowa State Fair.  I'm keeping my non-traditional cinnamon roll entry secret, because I think I actually may have a chance to win in that class.  The other two classes, though, traditional cinnamon roll and sticky bun, are crap shoots, so I figure it won't matter if I post a recipe.  I'm just crossing my fingers that I get a judge who likes this type of sticky bun, and maybe this year my sticky buns will go behind the velvet curtain, instead of straight to the reject table.
I'm posting this recipe because I think these buns taste wonderful, and this coming from a woman who doesn't really eat cinnamon rolls anymore because she's made and tasted way too many.  Something about the caramel and pecans set these apart, though, and I can still enjoy them.
I'm not going to lie, this is kind of a complicated recipe, but if you're into that sort of thing, give 'em a try. The unique thing about these sticky buns is that I've laminated half of the filling (butter, sugar, cinnamon) into the dough.  I just thought it would make them a little more interesting, but not quite "non-traditional."  The topping is a simple brown sugar and butter caramel that I think is outstanding due to its simplicity.  Overall, very satisfying.

1.  Make the dough: Heat the milk and butter in a small saucepan or in the microwave until butter melts.  Remove pan from heat and set aside until the mixture is lukewarm (about 100 degrees). In the bowl of a standing mixer fitted with the paddle, mix together the warm water, yeast, sugar, egg, and yolk at low speed until well mixed.  Add the salt, warm milk mixture, 1 teaspoon vanilla, and 2 cups of the flour, and mix at medium speed until thoroughly blended, about 1 minute.  Switch to the dough hook, add another 2 cups of the flour, and knead at medium speed (adding ¼ cup more flour, 1 tablespoon at a time, if necessary) until the dough is smooth, about 10 minutes.  Scrape the dough into a large lightly oiled bowl, turn to coat, then cover bowl with plastic wrap.  Let dough rise in refrigerator overnight.

2. Mix the filling: Mix together the filling ingredients and set aside.

3. Make the topping: In a medium sized pot over medium high heat, mix together the butter, light brown sugar, corn syrup, and water.  Stir constantly as you bring to a boil.  Once it has come to a boil, remove from the heat.  Butter a 9 X 13 inch cake pan.  Pour caramel topping into the pan.  Sprinkle pecan pieces evenly over the surface of the caramel.  Set aside.

4.  Form the rolls:  Turn dough out of bowl onto a lightly floured work surface.  Using a rolling pin, shape the dough into a 16 by 12 inch rectangle, with a short side facing you.  Spread half of the sugar, butter, cinnamon mixture over 2/3 of the rectangle.  Starting with the unbuttered third, fold the dough into thirds like a letter.  Roll out to a large rectangle again and fold in thirds again.  Then fold in thirds one more time.  Wrap in plastic wrap and refrigerate for about half an hour.  Then roll dough out to a 16 x 12 inch rectangle.  Spread the remaining sugar, butter, cinnamon mixture over the entire surface and roll up, starting at one of the 12-inch sides.  Cut log evenly into 6 rolls.  Place rolls onto nuts & caramel in the pan.  Cover with plastic wrap and let rise until doubled (45 minutes to an hour).  While the rolls rise, preheat oven to 350°.

5.  Bake the rolls: When the rolls have fully risen, put in the preheated oven and bake until rolls are deep golden brown and an instant read thermometer inserted into the center of a roll reads 185-190°F, about 28-35 minutes.  Remove from oven and cool for about 5 minutes.  Invert rolls onto a large cookie sheet, making sure to get all of the caramel and nuts on top.  Cool for 10-15 more minutes before serving.
Makes 6 rolls