My German/Irish-thinks-she's-Chinese mother has made won tons of the pork variety ever since I can remember.  People LOVE them and make themselves sick eating too many of them.  I, being the foreignfoodaphobe that I am do not care for the pork won tons.  I will eat the crispy wrapper, but not the insides.  I can't explain why.  I'm just weird like that.
I've always thought, though, that won tons would be tasty with something like an apple filling--something like a mini McDonald's fried apple pie.  I didn't actually try it out until I wanted to enter something in the Tone's something-or-another competition at the Iowa State Fair.  They turned out really good and won third place.  (First place was some sort of cinnamon meat ball--ick--and second place I don't know.)  They're sort of a novelty, and I've only made them a couple of times.  But they are delicious and impressive if you want to take the time to make them to impress your friends and family.

1.  Add lemon juice to diced apples and toss.
2.   In a large skillet or Dutch oven over medium high heat, melt butter.  Add diced apples, salt, cinnamon, nutmeg, and brown sugar.  Stir until blended and cook ‘til bubbly.
3.  Meanwhile, mix cornstarch into apple juice.  When apples are bubbling, stir in apple juice/cornstarch blend.  Reduce heat to low, cover, and simmer for 6-8 minutes, or until apples are fairly tender.
4.  Remove apples to heat-proof bowl to cool completely.  Refrigerating 2 hours to overnight works best.  When cool, mix in chopped walnuts.
5.  Lay out a wonton wrapper.  Scoop about 1 teaspoon of apples into the center.  Moisten two adjacent sides of the square with water and then fold the non-moistened tip onto the moistened tip to form a triangle.   Seal well, snuggling the apples in with the wrapper.  (Otherwise the apple filling will ooze out and wreak havoc as you fry.)  You should have a triangle with a big bulge.  With the triangle’s apex facing down, moisten the left tip with water, and then bring the right tip over it, sealing the two together.  It looks best when you leave about ¼ inch of each tip out to form a little tail for the wonton.  (See photo at the end.) Set onto a waxed paper lined cookie sheet.  Repeat with the remainder of filling and wrappers.
6.  In a large paper bag, mix the 1 cup sugar with 1 ½ teaspoons cinnamon.  Set aside.
7.  In a deep skillet or other frying vessel, heat about 2 inches of canola oil to about 360°.  Fry 3-5 wontons at a time, being careful not to crowd them.  Turn over when one side is a nice golden brown.   Fry until both sides are golden.  Drain quickly in a slotted spoon then drop into bag with cinnamon sugar.  Toss gently and then remove with tongs to paper towels to cool and drain more.
Let cool at least 5-10 minutes before eating/serving.
Serve with vanilla ice cream or sweetened whipped cream.
Makes about 4 dozen wontons. 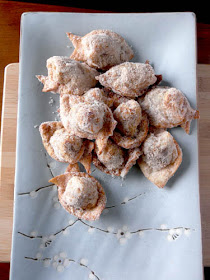