I've made more sticky buns in the last five years than I care to even count.  They do remain, though, one of the few forms of cinnamon rolls I can still eat more than one bite of.  It's probably the pecans--their toasty, crunchy texture along with their buttery nutty flavor.  Mmmmm...  I just don't know HOW I have NOT won the sticky bun competition yet at the Iowa State Fair.  I've chalked it up to the competition being mostly based on luck, assuming  your bun tastes good at all.  I mean, it's hard to make something with bread dough, butter, brown sugar, and pecans that doesn't taste good.  You just have to get the right judge at the right time.  I mean that I need to get the right judge.  I will continue to enter the competition because I'm going there anyway to enter the non-traditional class, where I seem to have more luck.  I look at entering the classic cinnamon roll and sticky bun classes as buying a lottery ticket.  If I enter, at least I have a little bit of a chance of winning.
Here's my latest version of a pecan sticky bun.  I might try fewer nuts next year because the winners I've seen have fewer nuts.  Why do I do this?  I know it's a crap shoot.

Ingredients:
Instructions:
1.  Heat the milk and butter in a small saucepan or in the microwave until butter melts.  Remove pan from heat and set aside until the mixture is lukewarm (about 100 degrees).

2.  In the bowl of a standing mixer fitted with the paddle, mix together the warm water, yeast, sugar, egg, and yolks at low speed until well mixed.  Add the salt, warm milk mixture, & 2 cups of the flour, and mix at medium speed until thoroughly blended, about 1 minute.  Switch to the dough hook, add another 2 cups of the flour, and knead at medium speed (adding ¼ cup more flour, 1 tablespoon at a time, if necessary) until the dough is smooth, about 10 minutes.  Scrape the dough into a large lightly oiled bowl, turn to coat, then cover bowl with plastic wrap.  Leave in a warm, draft-free spot until doubled in bulk (1 ½ to 2 hours).

4. Before forming the rolls, prepare the sticky stuff as follows:  In a medium saucepan, melt ¾ cup butter over medium heat.  Whisk in the brown sugar and cook, stirring, to combine.  Remove from heat and whisk in the maple syrup, cream, water, and salt.  Let cool until it’s at room temperature (about 30 minutes).

7. After dough has doubled, turn dough onto a floured working surface.  Using a rolling pin, shape the dough into a 16 x 12 inch rectangle, with a long side facing you.  Mix together the brown sugar, the cinnamons and the salt, in a small bowl.  Evenly spread the 4 T softened butter over the surface of the dough.  Pour brown sugar mixture over the dough and spread with a fork or your fingers evenly over the surface of the dough, leaving a ½-inch border at the far edge.  Begin rolling with the short edge closest to you, pinching the dough with your fingertips as you roll, to make the roll tight.  Moisten the top border with water and seal the roll.  Press and gently squeeze the roll to make a uniform 16-inch cylinder.  Trim off ends and cut into 6 equal pieces.  Place on top of sticky nutty stuff.  Cover with plastic wrap and allow to rise until doubled, about 1 hour.

8.  When the rolls have fully risen, put in the preheated oven and bake at 350°F until rolls are deep golden brown and an instant read thermometer inserted into the center of a roll reads 185-190°F, about 25-30 minutes.  Remove from oven and let cool for about 5 minutes.  Invert the rolls onto a cookie sheet.  Redistribute sticky nutty stuff if needed.
Makes 6 large rolls 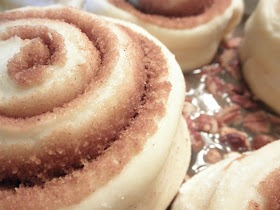